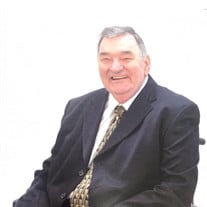 Mr. Anthony Cornell (Bo) Owens, age 73, passed away at his home in Murfreesboro, TN, on Monday May 16, surrounded by his family. Funeral services will be held at Big Cove Holiness Church at 1:00 pm Sunday May 22. Burial will follow the service... View Obituary & Service Information

The family of Mr. Anthony Cornell (Bo) Owens created this Life Tributes page to make it easy to share your memories.

Send flowers to the Owens family.