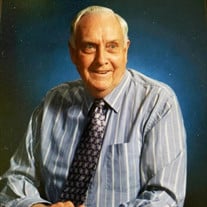 Not sure what to send?

Mr. Billy P. Gross, 92, of Scottsboro, AL passed away on Thursday, June 23, 2022. Bill was a life-long resident of Scottsboro and the son of James Polk and Bertie Gross. He started school at Temperance Hill School then went on and graduated from Jackson County High School in 1948 and married Barbara Ann Kent in 1955. They were together for 66 years until her passing in February 2022. After graduation, he attended Snead State College then went to work for the railroad in Birmingham. At the time of Korean War conflict 1950-1952 he was commissioned to serve with the Company B 151st Engineering Battalion with whom they had all remained in close contact with each other through all the passed years, and he served as secretary. He was also captain and commanding officer of the Company D 103rd Infantry Battalion of the Alabama State Defense Force. In 1954, he joined W. J. Word Lumber Company as a floor clerk, later promoted to office manager, credit manager, assistant manager then on to become general manager. He retired from the company in 2005 with 51 years there. He was part owner and President of Word Lumber Company in Rainsville, AL and part owner of the stores in Fort Payne, AL and Manchester, TN. In 1998, Bill was named Jackson County Citizen of the Year. He was an active member of the American Legion, VFW, and was a proud Veteran. He was also in the Scottsboro Lions Club where he was named Lion of the Year in 1997 and also received the Melvin Jones Fellow award which was the highest honor given and was made a Honorary lifetime member of the Lions. He was a member of Randall’s Chapel United Methodist Church. Bill is survived by his son, Jim (Sherry) Gross; daughter, Denise Gothard; grandson, Kent Gross; granddaughters, Tisha Gross, Chynna Gross, Morgan Gothard, and Kami Gothard; step-grandchildren, Lonnie (Holly) Gothard, Jessica (Ricky) Talkington, and Season (Lee) McKelvey; 9 great-grandchildren; sisters, Evelyn Smith, Jean Hale, and Nina Brandon; brother, Robert Gross; and brother in law, Jimmy (Jean) Kent. He was preceded in death by his parents, James Polk and Bertie King Gross; son in law, Ronnie Gothard; brother, Raymond Gross; brothers in law, Don Smith, Jimmy Hale, and Billy Frank Brandon; and sisters in law, Bettye Gross and Ann Gross. Funeral services will be held on Sunday, June 26, 2022 at 4:00 p.m. at Scottsboro Funeral Home with Dr. Joey Karr officiating. Burial will follow at Cedar Hill Cemetery. The family will receive friends on Saturday, June 25, 2022 from 5:00 p.m. until 7:00 p.m. at the funeral home. In lieu of flowers, donations can be made to Randall’s Chapel United Methodist Church. Arrangements are Entrusted to Scottsboro Funeral Home

Mr. Billy P. Gross, 92, of Scottsboro, AL passed away on Thursday, June 23, 2022. Bill was a life-long resident of Scottsboro and the son of James Polk and Bertie Gross. He started school at Temperance Hill School then went on and graduated... View Obituary & Service Information

The family of Mr. Billy P Gross created this Life Tributes page to make it easy to share your memories.