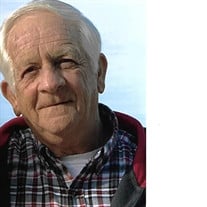 Danny Lee Potts, age 68, of Woodville, went home to be with the Lord, Sunday, January 3, 2021. A graveside service will be held on Wednesday, January 6, 2021 at 10:00 am at Union Cemetery with Rev. Ron Hardeman and Chaplain Coy Hallmark, USARNG, Retired, officiating. Family will serve as pallbearers. There will be a visitation to follow the service at 11:00 am at the cemetery. Danny was a devoted husband, father, pawpaw, and friend. He was loved by so many and was known by our family as our gentle giant. We have often laughed at how he could give correction with such a gentle voice, but the message was always received as it was intended. Danny grew up in Tuscumbia, Alabama where he loved fishing, hunting, skiing with his buddies, camping with his family, and in general anything to do with the outdoors. At a young age of 18, he enlisted into the Army. He served his basic training in Fork Polk, Louisiana and later completed his AIT (Advance Individual Training) in Fort Eustis, Virginia as a 68-F20 Aircraft Electrician. After his training and specialty education, Danny was on his way to Vietnam to proudly serve his country with the 101st Airborne Division, A Company, 5th Transportation Battalion at Ft. Campbell, Kentucky, where he completed his active duty service at rank of SP4 (Specialist 4th Class) (E-4). Special Service Medal, W/1 Campaign Star; Vietnam Campaign Medal; 1 Overseas Service Bar; Expert Badge (M-16); Good Conduct Medal. Shortly after returning from Vietnam, he met the love of his life. He has told throughout the years how he knew at first site that this girl would be his wife. They have raised two beautiful children and blessed with four beautiful grandchildren, Kalob White, Payton Hatcher, Brinlee and David Potts and step grandson, Jaxen White, who all was PawPaw’s pride and joy. Pawpaw also enjoyed the love of his little fur buddy, Oreo, who has been with him for 14 years. Danny later was employed with the TVA Brown Ferry’s nuclear plant and was accepted into the Local #498 Plumbers and Pipefitters Union. He received an opportunity to get into the Pipefitter Apprenticeship Program that moved him to Bellefonte Nuclear Plant in 1975. Woodville, Alabama became the home for Danny and his family for 46 years. He served his community as Deacon, Music Director and Sunday School teacher at Woodville Baptist Church and later served at Ridgedale Baptist as Music Director and Sunday School teacher. Danny served on the Woodville Town Council, The Jackson County Special Olympics with TVA, The Optomist Club, Boy Scouts, Woodville Recreation Board, and served Woodville School as Trustee. He is survived by his wife, Brenda (Terry) Potts of Woodville; son, Jason Potts (Danielle) of Estillfork; daughter, Jennifer Hatcher (Ralph) of Woodville; grandchildren, Kalob White, Jaxen White, Payton Hatcher, Brinlee Potts and David Potts; sister, Donna Potts Risner (Johnny); and a abundance of family and friends. He was preceded in death by his parents, Ernest Lee (Red) and Billie Ruth Potts of Tuscumbia, AL. The family would like to extend a huge thank you to his professional caregivers, who had the biggest hearts and gained a special friend by knowing Danny. Thank you to Clearview Cancer Institute and Dr. Katragadda, his oncologist; Alliance Care and Dr. Gleason, his radiologist; Kindred Home Health Care, Julie and Josh, his physical therapist, who were tremendous with Danny; Ashley, his wonderful and caring nurse; and Janet, the best Social Worker and supporter as we were blessed to know her. In lieu of flowers, donations may be made to Woodville Fire Dept. Arrangements entrusted to Scottsboro Funeral Home

Danny Lee Potts, age 68, of Woodville, went home to be with the Lord, Sunday, January 3, 2021. A graveside service will be held on Wednesday, January 6, 2021 at 10:00 am at Union Cemetery with Rev. Ron Hardeman and Chaplain Coy Hallmark, USARNG,... View Obituary & Service Information

The family of Mr. Danny Lee Potts created this Life Tributes page to make it easy to share your memories.

Send flowers to the Potts family.