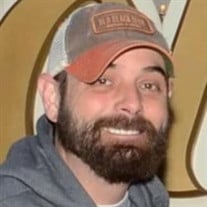 Derek Lee Chastain, cherished husband, father, son, brother, uncle, cousin, nephew and friend was killed in a car accident in Scottsboro, AL on Saturday, August 1, 2020, he was 39. Born December 18, 1980, Derek lived his early childhood in Chickamauga, GA and later called Chattanooga, TN and Scottsboro, AL his home. He attended Hixson High School, graduated from Oxford High School and attended Jacksonville State University. Derek started his 22-year restaurant/bartending career in 1998 at Applebee’s Grill & Bar in Hixson, TN and was working as a Manager at Applebee’s Grill & Bar in Fort Payne, AL at the time of his death. He spent 15 years of his career working as Manager and Bartender at The Docks in Scottsboro “behind the pine” which he proudly called bartending, where he loyally served his customers food, drinks, friendship, kindness and love with smart, quick-witted humor. Derek married his best friend Steffany Grentz on November 11, 2011. A devoted father, Derek was most proud of his three children Lily, Dylan and Brooklyn; he loved them with all his heart and enjoyed spending family time with them and his wife Steffany. A Top Gun movie fan, he would playfully respond to them with phrases from it like “negative ghost rider, the pattern is full” or “talk to me Goose”. Derek was an avid outdoor BBQ and grill master, making his own sauces and rubs and always up for trying new techniques. He was a protective big brother to his sister Jennifer but never missed an opportunity to poke fun or remind her just how lucky he thought she was to have him as her brother. Derek is survived by his wife Steffany, children Lily Jones, Dylan and Brooklyn Chastain; parents Raymond Chastain Jr. (Tonya) of Scottsboro, AL, Criss Martin Grant (George) of Chattanooga, TN; sister Jennifer Young (Ryan) of Soddy Daisy, TN; grandfather Raymond Chastain Sr. (Evon) of Chattanooga, TN; aunts and uncles Richard Chastain (Ted) of Nashville, TN, Missy Martin Davis of Ringgold, GA, Tony Martin (Amy) of Thompsontown, PA; In laws Mary Lou Upton, Jarred Grentz (Amy), Jamie Grentz; cousins, Bridget Neelley (Jeremy), Mackenzie and Bryce Martin; niece and nephews Madison Ledbetter (Ryley), Heath Brockman (Courtney), Marlee McBride, Maya and Halle Grentz, Alyssa, Connor and Easton Young. He was preceded in death by grandparents Barbara Chastain, Mark Martin, Mary Martin Gray; nephew Hunter Haislip, niece Rylan Brockman. Derek had a heart of gold and was loved by all who knew him, a memorial service for family and close friends will be held 2:00 p.m. Central time Sunday, August 9, 2020 at Scottsboro Funeral Home. There will be no visitation, a celebration of Derek's life will be held at a later date. Arrangements Entrusted to Scottsboro Funeral Home

The family of Mr. Derek Lee Chastain created this Life Tributes page to make it easy to share your memories.

Send flowers to the Chastain family.