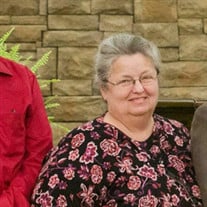 Deveda Stone Cain, 65, of Pleasant Groves, passed away on Wednesday, January 13, 2021. She was a member of Pleasant Groves Holiness Church for almost 40 years, receiving the Holy ghost in a Monday night prayer meeting on June 17, 1981. She worked as the Pleasant Groves Town Clerk for 18 years. She also worked on the square in Scottsboro for over 40 years as a legal secretary. She was a hard worker and was willing to help people in any way she could, often sacrificing her time, as well as her health. She considered her in-laws, both Stone and Cain, as her sisters and brothers, trying to organize get togethers for each side so they could be together. She is preceded in death by her parents, Paul and Estelle Stone and Fletch and Vicie Cain; sisters, Barbara Faye Fortner, Dot Brewer, Francis West, Trenda McAllister, Venie Sanders, and Ruby Jones; brothers, Billy Ray Stone, Wade Cain, Clarence Cain, JW Cain, James Cain, and Howard Cain. She is survived by her husband of 48 years, Jackie Cain; son, Jonathan Cain; brothers and sisters, Nelson Stone, Eugene and Linda Stone, Carroll and Deveda Stone, Dwight and Linda Stone, Eddie Stone, Martha and Frank Tackett, Ricky and Beth Stone, Avery and Rebecca Stone, Jean Miller, Pat Cain, Sandra Cain, Joyce Cain Landers, Sam and Dale Cain, and Janet Cain; as well as a host of nieces and nephews who she loved dearly. Funeral services will be held on Saturday, January 16, 2021 at 1:00 pm at Scottsboro Funeral Home with Bro. Nick West, Bro. Jack Lynch, and Bro. James Carl Black. Burial will follow at Pleasant Groves Cemetery. The family will receive friends on Saturday beginning at 10:00 am until time of service at funeral home. Arrangements Entrusted to Scottsboro Funeral Home.

Deveda Stone Cain, 65, of Pleasant Groves, passed away on Wednesday, January 13, 2021. She was a member of Pleasant Groves Holiness Church for almost 40 years, receiving the Holy ghost in a Monday night prayer meeting on June 17, 1981. She... View Obituary & Service Information

The family of Mrs. Deveda Stone Cain created this Life Tributes page to make it easy to share your memories.

Deveda Stone Cain, 65, of Pleasant Groves, passed away on Wednesday,...

Send flowers to the Cain family.