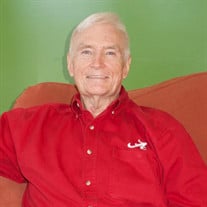 Br. Donald L. Thomas, went to be with the Lord, after passing away peacefully at his home in Pleasant Groves, Alabama, surrounded by his loving family, Monday, March 28, 2022. Donald's battle after receiving his recent diagnosis of cancer showed his courage in facing life's challenges with a smile and sense of humor. Despite the pain Donald became a winner and stayed strong until the end. He took great pride in being a dedicated husband, daddy, granddaddy, great granddaddy, and pet parent. He was born to Ray and Ilene Thomas in 1953, graduated from Pisgah High School, then went to work at Benhams, where he meet his wife of 47 years, Rita. Togther they had two daughters Brandy and April. Donald spent 33 years working for the Good Year and AKZO corporations. Donald truly enjoyed his current job at JDM farms, where he looked forward to going to work on the farm and enjoying the time he got to spend with the families that came to visit there. Donald enjoyed the simplest pleasures of life being a devoted husband, working hard to provide for his family, loving and making sure his wife, daughters and grandkids had what they needed and wanted. Donald often stopped what he was working on to teach his grand kids how to hunt, fish, work on cars and fix things that were broken even if it was with zip ties, silicone, and duct tape. Donald gave his life to the Lord on July 27, 1980 by receiving the gift of the Holy Ghost at Hytop Free Holiness church. This day brought Great joy to Donald, he was so overcome with happiness that Rita had to drive home while holding their 3 month old daughter while Donald praised the Lord, Donald even rolled down the window to tell some men picking up garbage about the wonderful Holy Ghost he had received. He was member of Pleasant Groves Free Holiness Church for 37 years and was a current member of Plevna Free Holiness Church. Donald had a great love for the Lord. Donald was a great example as he lived his daily life to teach his kids and grand kids how to work and live for the Lord. Funeral service will be held 2pm Thursday, March 31, 2022 at Pleasant Groves Holiness Church, with burial following in the church cemetery. Visitation will be held at the church on Wednesday, March 30, 2022 from 3-9 p.m. Mr. Thomas is survived by his wife, Rita West Thomas; daughters: Brandy Thomas and April (Walter) Knight; grandsons, Chandler (Auburn) Thomas, Cameron Knight, Thomas Conner Knight and Gavin Knight; great granddaughter, Olivia Thomas; sisters, Polly Hutcheson, Loretta (Sonny) Allen and Linda (Greg) Loveless; brothers, Leon Thomas and Harold (Laverne) Thomas; sisters-in-law, Phyllis (Steve) Golden and Donna West; and brother-in-law, Tommy Dalton. He was preceded in death by his parents, Glendon Ray and Lillie Ilene Kennamer Thomas; mother and father-in-law, Thomas Duke and Betty West; sisters-in-law, Myrtle Thomas, Bonnie West, Helen West and Brenda Dalton; and brothers-in-law, Ray Hutcheson, Hubert West and Larry West. Arrangements Entrusted to Scottsboro Funeral Home.

Br. Donald L. Thomas, went to be with the Lord, after passing away peacefully at his home in Pleasant Groves, Alabama, surrounded by his loving family, Monday, March 28, 2022. Donald's battle after receiving his recent diagnosis of cancer... View Obituary & Service Information

The family of Mr. Donald L. Thomas created this Life Tributes page to make it easy to share your memories.

Br. Donald L. Thomas, went to be with the Lord, after passing...

Send flowers to the Thomas family.