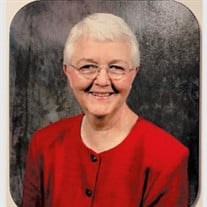 Mrs. Dorothy J Black Claybrook, of New Site, Alabama, passed away peacefully in her sleep Monday, November 23, 2020 at Highlands Medical Center in Scottsboro, Al, she was 82 years old. She was preceded in death by her husbands, RL Black and Billy Joe Claybrook; her son, Robert Black; her parents, Raymond and Ina Jones; and brother, Roger Jones; son in law, Benny Olinger and several other friends and family members. She is survived by her children, grandchildren and great grandchildren, Consuela (David) Annastasia Black and Zane Milford, Lisa (Eddie) Jackson, Jake and Drew Myers, Bena’, Shane and Codi Olinger, Vonda (Mike) Bryant, Josh (Amanda), Daniel (Jessica), Savannah White and Kolten Proctor and Patsy (Gary) Corey (Brooke) and Aubree Love; and brother and sister in law, Larry (Gail) Jones. Dot was a long time member of Scottsboro First United Methodist Church where she was a member of the Budding Sunday School Class, a shepherd in the Shepherd Ministry and a member of the Hilltoppers Group. She was involved of several civic and social organizations including the Tree Commission of Scottsboro, The Quilting Guild, VFW Auxiliary, Master Gardeners, Citizen Police Force and Friends of the Library. She spent a great deal of her life devoted to others. She was a Registered Nurse at the Jackson County Nursing home for over 25 years where she was often referred to as an angel because of her white hair, her nurse’s cap, her soft voice and her gentle ways. There will be a private service Friday, December 4 and she will be laid to rest at Pinehaven Memorial Gardens between her first husband and her son. In lieu of flowers, the family is asking donations be made to Scottsboro First United Methodist Church (www.fumcscottsboro.org ), UMCOR (UMCOR - Global Ministries (umcmission.org) ) or the VFW Auxiliary 1616 Heroes Drive, Scottsboro, AL 35768. Arrangements Entrusted to Scottsboro Funeral Home

Mrs. Dorothy J Black Claybrook, of New Site, Alabama, passed away peacefully in her sleep Monday, November 23, 2020 at Highlands Medical Center in Scottsboro, Al, she was 82 years old. She was preceded in death by her husbands, RL Black and... View Obituary & Service Information

The family of Mrs. Dorothy "Dot" Black Claybrook created this Life Tributes page to make it easy to share your memories.

Send flowers to the Claybrook family.