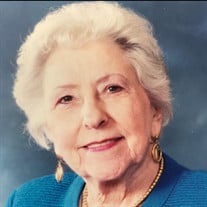 Elisabeth Catherine Covey Collins passed away on March 29 th after a long and fulfilling life. Elisabeth was born to Jesse Raymond and Elizabeth Sadler Covey on February 11, 1925, in Dublin, Virginia. She grew up on the farm helping her mother prepare meals for boarders who helped her father do the necessary chores to keep the farm thriving. She graduated from Dublin High School where she was Valedictorian of her class. She attended Radford College (now Radford University) and graduated with a degree in English. After graduation she moved to Rising Sun, Maryland, to live with a beloved aunt and uncle In Maryland. While living there she taught school. On one fateful night mutual friends set her up on a “blind” date to play bridge with Carl Collins, LTJG, US Navy, stationed in Bainbridge, Maryland. Her children surmise that their father proposed marriage on their second date since they married 3 months and 5 days later, and Elisabeth made her own wedding dress! Following their wedding on July 20, 1947, they moved to Birmingham where Elisabeth taught school again and Carl completed a surgical residency. Following their time in Birmingham, they moved to Scottsboro in 1949. In later years and for a long time, she kept a quote on her refrigerator which stated, “Behind every successful man is a successful woman.” She took that to heart supporting Carl in every endeavor while enjoying her own interests. She quickly became a contributing member of the Jackson County Medical Auxiliary and served as a “pink lady” -- among other things -- at Jackson County Hospital (now Highlands Medical Center). In 1951, she was a charter member of the Three Arts Club. After her children were born, she became an ardent supporter of their activities. Her varied interests included bowling, golf, bridge, flying, hunting, and houseboat and motorhome travel. She earned her private pilot’s license and along with friends, participated in a Petticoat Derby. They came in 3 rd place. Elisabeth’s hobbies included handicrafts like macramé, decoupage, knitting, and more in earlier years. She was best known for her skills creating beautiful needlepoint works of art. As co-chairperson, she spearheaded the kneeling cushions and later the Christian paraments projects at the First United Methodist Church. She and Carl were members there from the time they came to Scottsboro. She was also well-known for her egg salad sandwiches. Many friends remember her Christmas tree ornaments and packages featuring an assorted color scheme every year. She and Carl along with friends and neighbors, Ruth and Charles Bradford, made an annual and fun event of flocking their Christmas trees at “the John Deere place.” Elisabeth’s survivors include her children Beth Collins Presley and Charles David (David) Presley, Jr., Amy Collins Cameron and Christopher Wilson Cameron, and Arthur (Art) Carl Collins, Jr., all of Scottsboro; her grandchildren Dr. Elise Presley Johnson and Daniel Anthony Johnson, Bogart, Georgia, and Charles David (Chad) Presley III, Huntsville, Alabama; great-grandchildren Carley Elisabeth Johnson, Tuscaloosa, Alabama and Henry (Hank) Harris Johnson, Bogart, Georgia; her sister, Margaret Covey Brewer, Roanoke, Virginia; her brother Jerry Joseph Covey, Dublin, Virginia; her sisters-in-law Annette Collins Dowdy and Dr. Robert (Bob) Hedley Dowdy, Destin, Florida & Kearney Nebraska, and Nancy Collins Helms and Steve William Helms, Woodville, AL, and many loving nieces and nephews. She is preceded in death by her parents, her beloved husband, Carl, to whom she was married for 53 years before he died in 2000, brothers Jesse Raymond Covey, Jr., Raymond Edward Covey, Sr., Herbert Sadler Covey, Earl Stuart Covey, Sr. nephews Wyatt Eugene (Gene) Collins, Jr. and Raymond E. (Butch) Covey, Jr., and nieces, Dr. Patsy Capps Covey and Sharon Hossler Covey as well as a brother-in-law, Dr. Wyatt Eugene Collins, Sr., and sisters-in-law, Kathleen Surber Covey, Lucille Turner Covey, Osceola Harper Covey, Gladys Collins Byrd Barclay, and Patricia Blankemeyer Collins. The family would like to give special thanks to Geneva Marcum, Elisabeth’s dear caregiver. The entire family loves her. They would like to also thank the exceptional, caring staff and friends at Rosewood Manor and the wonderful staff at Highlands Health & Rehab. The Celebration of Life service remembering Elisabeth will be Saturday, April 2 nd at 3pm at First United Methodist Church. For family members and friends who are able to pay their respects, Visitation will be Saturday, April 2 nd , 1-3pm at the Church. Burial will follow the service at Pinehaven Memorial Gardens, Hollywood, Alabama. Flowers are appreciated very much. The family requests that any donations in her memory go to one of the ministries (Nourish One Child or to the FUMC Foundation specifically) at First United Methodist Church, 1105 South Broad St., Scottsboro, AL, 35768 or to Radford University, Advancement Office, PO Box 6915 Radford, VA 24142. ~~ Arrangements entrusted to Scottsboro Funeral Home ~~

Elisabeth Catherine Covey Collins passed away on March 29 th after a long and fulfilling life. Elisabeth was born to Jesse Raymond and Elizabeth Sadler Covey on February 11, 1925, in Dublin, Virginia. She grew up on the farm helping her mother... View Obituary & Service Information

The family of Mrs. Elisabeth Catherine Covey Collins created this Life Tributes page to make it easy to share your memories.

Send flowers to the Collins family.