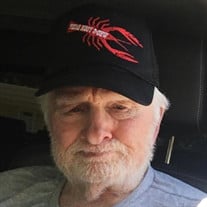 On Wednesday, June 15, 2022, Emmett Melton Johnson (nicknames included Red, Cooper Knob, Melton), husband, father, grandfather, and great grandfather passed away the age of 84. Funeral services will be held on Monday, June 20, 2022 at 2:00 p.m. at Scottsboro Funeral Home. Burial will follow at Macedonia Cemetery. The family will receive friends on Monday from 11:00 a.m. until time of service. Melton was born on May 27, 1938, in Macedonia, Alabama. He graduated from the first graduating class of Scottsboro High School in 1957 and joined the United States Army right out of high school with several of his high school buddies. He served proudly for 21 years, participated in the Vietnam War, lived around the world in multiple countries, and retired from the military on July 31, 1977. During his time in service while stationed in Hokkaido, Japan, he met his wife, Kiyoko. They married and had two daughters, Teresa and Donna, and one son, Franklin. Melton was very passionate about traveling. Often, you would find him on the road looking for the next best diner and if you named a landmark anywhere in the US, he could tell you the exact mile marker location. After retiring from the military, he became a professional truck driver allowing him to travel the United States for work and during vacation time he would continuously venture with his children and later with his grandchildren hoping to instill the same love he had for his country in his family. He always had a curiosity for the world, so much that he was a subscriber to National Geographic always curious about the world. He passed down his love for travel, exploration, and curiosity to his family. During his time in service, he was a platoon Sergeant, and earned several medals and accolades. He received a Bronze Star and additional commendations for his heroism, as well as a sharp-shooter designation. Emmett was preceded in death by his parents, Emmett F. and Mary B. Johnson; wife, Kiyoko K. Johnson; daughter, Donna Kay Hill; and two brothers, Donnie Johnson and Wonnie Johnson. He is survived by his daughter, Teresa Johnson; son, Franklin Johnson (DeeDee Johnson); grandchildren, Kristen Lockmiller (Morgan Lockmiller), Emily Truax (John Truax), Alex Johnson, Taylor Hill, and Brannigan Johnson; great-grandchildren, Sanders and Mills Morgan Lockmiller; and several nieces and nephews. Arrangements are Entrusted to Scottsboro Funeral Home

The family of Mr. Emmett Melton Johnson created this Life Tributes page to make it easy to share your memories.

Send flowers to the Johnson family.