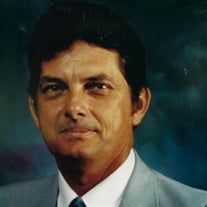 Mr. Ford Pierson McCuistion, Jr., age 82 of Dutton, Alabama passed away Tuesday, July 13, 2021 at his home. Ford McCuistion was born in Tennessee to Ford P. McCuistion, Sr and Nelle Copper McCuistion. Ford retired from the TVA’s Bellefonte Nuclear Power plant where he worked as a blacksmith. Ford was a Jack-of-All-Trades and a Master of Many. He was a thinker, planner, designer, landscaper, builder, and fabricator. From his home to his water features, if he could think of it, he could plan and build it. If he needed it but did not have it, he would make it. Ford also enjoyed restoring old tractors, trucks and engines Above all, Ford loved his family and liked nothing more than having them all get together for cookouts and gathering around a fire roasting marshmallows. He was bigger than life with an even bigger heart. Generosity was a significant part of his character. If you needed something Ford would make sure you got it. He will be sorely missed by his family and all who knew him. A family man, Mr. McCuistion is survived by his daughter and son-in-law, Tina and Bryan Bowling; son, Jeff McCuistion; 9 grandchildren; 13 great grandchildren; and several nieces, nephews, and friends. Along with his parents, he was preceded in death by his wife, Jennie McCuistion; daughter, Lisa Walker; son, Todd McCuistion; and 4 brothers. His family will receive friends Saturday, July 17, 2021 at Pleasant Hill Baptist Church in Dutton from 2-4 p.m. A visitation and graveside service will be held later in Rockwood, Tennessee. Arrangements Entrusted to Scottsboro Funeral Home

The family of Mr. Ford Pierson McCuistion, Jr. created this Life Tributes page to make it easy to share your memories.