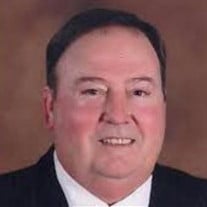 David Larry Morris, age 69, passed away Friday, February 18, 2022. Larry was born in Scottsboro on April 21, 1952. He graduated from Scottsboro High School in 1970. He was the Student Council President and was elected class favorite and best all-around. He was a Wildcat wrestler, captain of the football team and member of the National Honor Society. He graduated from Jacksonville State University in 1974. Larry returned to Scottsboro after college to serve as a teacher at Scottsboro High School. Over his 38 years of his career in education, he taught elementary reading, driver’s ed, several business courses, and co-op. He interacted with countless young people during his time as an educator. Larry, affectionately known by many as Coach, served Scottsboro High School by coaching both track and wrestling, but he is most remembered for his time spent on the football field. He served as an assistant football coach from 1971 to 1991. In 1991, Larry became head coach of the Wildcats and led his team until 2004. Over the course of his football coaching career, several of his teams won area titles, and he became the winningest coach in school history. Coach still holds the longest tenure as SHS head football coach. From 2005 until 2012, Larry worked as the SHS athletic director, and in 2010, he was recognized by AHSAA as the state’s Athletic Director of the Year. After retiring from Scottsboro City Schools in 2012, Coach continued pursuing his passion for sports by serving AHSAA as a member of the District Legislative Council and as a leader on the Central Board. He was recognized in 2014 with his induction to Alabama High School Sports Hall of Fame, and in 2012 was honored by becoming a namesake for Scottsboro’s field house. Larry lived a life of faith and devoted himself to Calvary Baptist Church. He served as a deacon and Sunday school teacher as well as on various church committees throughout his life. Larry’s favorite hymns were “Beulah Land,” “Precious Lord Take My Hand,” and “Amazing Grace.” Larry is survived by his wife Carol Morris; his daughter and son-in-law, Erin and Jeff Young; grandchildren Blake and Taylor Young, Kamden Young and Emily Hancock, and Haynes and Benton Young; his sister and brother- in-law, Joan and Leroy Armstrong; brother-in-law and sister-in law, Mark and Smith Pass; nieces and nephews, Amy and Jim Harrington, Holly and Marty Cobb, Matthew and Brannon Pass, Seth and Carson Pass, and Cameron and David Jackson; great-nieces, Kathryn, Susan Grayton, Ruby, Kathryn Ross, Ila Benton, Hayden, and Collins, and great-nephews, Samuel, Hollis, Briggs, and Davis. Larry was preceded in death by his father, Jewell Morris and his mother, Ruby Johnson Morris. Larry spent some of his favorite days on the Tennessee River with a fishing pole in hand. To share in his love of both fishing and children, donations can be made in honor of him to Children’s of Alabama, Attn: Laura Dunaway (Castin’ N Catchin’) 1600 7th Avenue South, Birmingham, Alabama, 35233. The Family has requested that all former players and coaches meet at the 50 yard line at 12:30pm Sunday at Trammell Stadium for a finale team picture. The graveside service for Coach Morris will also be streamed. You may view the service by clicking the following link: https://www.fullcueproductions.com/live

David Larry Morris, age 69, passed away Friday, February 18, 2022. Larry was born in Scottsboro on April 21, 1952. He graduated from Scottsboro High School in 1970. He was the Student Council President and was elected class favorite and best... View Obituary & Service Information

The family of Coach Larry Morris created this Life Tributes page to make it easy to share your memories.

Send flowers to the Morris family.