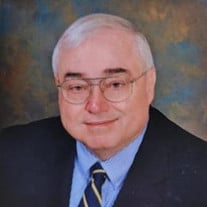 Lewis Wendell Page, Jr. of Birmingham, Alabama died on May 5, 2022, in his hometown of Scottsboro, Alabama. Lewis was born on November 6, 1947, the son of Lewis Wendell Page, Sr. and Maymie Elizabeth Parks Page. He graduated from Scottsboro High School in 1966 and Auburn University in 1970. While at Auburn University he was a member of Tau Kappa Epsilon Fraternity and the Auburn University Debate Team. In April 1970, he was initiated into the Auburn University Chapter of Omicron Delta Kappa. He graduated from the University of Alabama School of Law in 1973. Upon graduation, Lewis was selected for membership in the Order of Coif and was commissioned as an officer in the United States Army. After completing his active-duty service in the United States Army, Lewis graduated from George Washington University in 1975 with a Degree in Economic Regulation and with an LLM in Administrative Law. Lewis practiced law in Birmingham from 1973 until 2020 where he practiced Business Litigation, Trial Practice, Banking Litigation, and Intellectual Property. Lewis was a member of the Birmingham Bar Association (Member, Executive Committee, 1998-2001), Alabama State Bar (Chairman: Antitrust Section 1983, Permanent Code Commission, 1988-1990), Auburn University Bar Association (President, 1993-1994) and American Bar Association. In 2021, Lewis returned to his hometown to reside first at Rosewood Manor and then at Cloverdale Nursing Center. Lewis’ family expresses their profound appreciation to both facilities for the care they provided. Lewis’s large and devoted extended family also cared for him during his time in Scottsboro. Special thanks to his brother, Robert Page and cousins, Mary Nixon and Martha Pullen, for their sacrificial care of Lewis in his last year. Lewis was predeceased by his parents, Lewis Wendell Page, Sr. and Maymie Elizabeth Parks Page. He is survived by his daughter Margaret “Mollie” Amelia Page (Kirk McGettigan) of Bellevue, Washington, his daughter Katherine “Katie” Elizabeth Page of Castle Rock, Colorado, his brother, Robert Lee Page of Scottsboro, his grandchildren, Cole McGettigan, Reed McGettigan, Grayson Page, Hannah Page and Jackson Page, the mother of his children, Lucretia Roberts Page, and many cousins, nieces, and nephews. A graveside memorial service will be held on Wednesday, May 11, 2022 at 12:30 PM at the Cedar Hill Cemetery, Scottsboro. Memorial gifts may be made to the Scottsboro-Jackson Heritage Center, Post Office Box 53, Scottsboro, Alabama 35768, or a charity of your choice.

Lewis Wendell Page, Jr. of Birmingham, Alabama died on May 5, 2022, in his hometown of Scottsboro, Alabama. Lewis was born on November 6, 1947, the son of Lewis Wendell Page, Sr. and Maymie Elizabeth Parks Page. He graduated from Scottsboro... View Obituary & Service Information

The family of Mr. Lewis Wendell Page Jr. created this Life Tributes page to make it easy to share your memories.

Lewis Wendell Page, Jr. of Birmingham, Alabama died on May 5,...

Send flowers to the Page family.