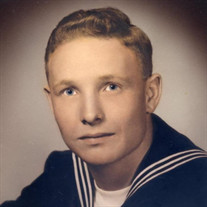 Ralph Lee Henderson On 11 October at 8:15pm, Ralph completed the race set before him and peacefully went home to be with his Lord and Savior at their home in Scottsboro. Ralph was surrounded by his wife and all five of their children as they comforted him by singing the old hymn, “Blessed Assurance”. Ralph was born the 18th of February 1936, to Russell Sagar Henderson and Bernice Louise (Cooper) Henderson in Morristown, NJ. He was preceded in death by his twin brother Roy Henderson, and his son in law, Gary Senestraro. He is survived by his wife of 60 years, Fern Henderson, his five children; Debra (Dave) Heisterkamp, Bonnie (Ken) Davis, Cyndee Senestraro, Dean (Jennifer) Henderson, and Stephen (Elizabeth) Henderson. Ralph is also survived by 17 Grandchildren and 22 Great Grandchildren. Ralph was an active member of Woodville Baptist Church in Woodville Alabama, where he served as a lay-preacher. Ralph accepted Jesus as his personal savior while serving in the Navy in 1958. He departed the Navy in 1960 and attended Baptist Bible Seminary in Johnson City, NY where he met Fern Sheldon (sister of Ralph’s roommate, Charles Sheldon). Ralph and Fern married in July 1961, and moved to Bainbridge NY. Over the years, Ralph served God everywhere he went and in many churches. His knowledge and wisdom of God’s word benefited all who had the opportunity to be mentored by him, or hear him preach. He loved God, his family, and his country with his whole heart. He was known for his generous and loving heart by all that knew him. He is forever loved by his family and his influence will continue to impact and challenge his descendants to follow Christ. He was comforted by the words of Paul the Apostle in II Corinthians 5:6-9. Though absent from the body, he is present with the Lord. Funeral services will be held on Friday, October 15, 2021 at 2:00 p.m. at Woodville Baptist Church with Rev. Rick Freeman officiating. A graveside service will be held at Pinehaven Memorial Gardens after the church service. The family will receive friends beginning at 1:00 p.m. on Friday. The service may be observed by navigating to woodvillebaptistchurchal.com and then clicking on the "LIVE" tab across the top of the webpage. The family requests that if you wish to order flowers, please do so with Woods Cove Flowers in Scottsboro, AL at 256-259-5100.

Ralph Lee Henderson On 11 October at 8:15pm, Ralph completed the race set before him and peacefully went home to be with his Lord and Savior at their home in Scottsboro. Ralph was surrounded by his wife and all five of their... View Obituary & Service Information

The family of Mr. Ralph Lee Henderson created this Life Tributes page to make it easy to share your memories.

Send flowers to the Henderson family.