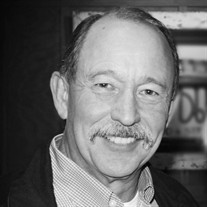 Robert Bishop Dawson, Sr., 68, loving and devoted husband, father, grandfather, son, brother and uncle, passed away peacefully surrounded by loved ones after suffering a short illness on Monday, September 1, 2020. Having grown up in Scottsboro, Robert was well known. He attended Scottsboro High School and wore the number 22 jersey for the varsity football team, playing halfback and safety. After graduating from SHS in 1970, he was subject to the military lottery as the draft was implemented just as he graduated. After attending the University of Alabama for one year, he enlisted in the United States Army. Stationed in South East Asia, he served four years working for the N.S.A. in intelligence; he was honorably discharged and returned back home to Scottsboro. Having grown up in the Tennessee River Valley, he had a deep-rooted love for hunting, fishing, as well as golfing. He was a member of Ducks Unlimited, USGA and the VFW. He was also an active member of Saint Luke’s Episcopal Church. With his father having been a firefighter and Fire Chief, Robert followed in his father’s big footprint to become a firefighter. He served for 27 years, retiring as a Captain. He also ran a consolidated purchasing company simultaneously. Pursing a second career in midlife, Robert attained his undergraduate degree in Fire Science and Business Administration from the University of Alabama in Huntsville, later pursuing nursing at Northeast Alabama Community College becoming a registered nurse, working primarily in the emergency room at Highlands Medical Center. He continued his interest in nursing at Southern Estates Assisted Living Facility he and his wife, Shirley, built in 1993 where they provided loving and compassionate care to the residents and their families. Meeting his life partner and love, Shirley, and having a family life with her brought the greatest joy and happiness to him. They were married for 34 years and have four children and nine grandchildren. Their children are Robert Bishop Dawson, Jr, Shannon Vines Haston (Tim), Bradley Howell Vines, and Cheryl Vines Thornton (Lynn). Their grandchildren are Layton and Liv Dawson; Wimberly and Windsor Haston; Carson Vines; Christian Gray; Dillion, Adyson and Matlyn Thornton. He is also survived by his sisters, Deborah Gunter and Emma Dean (Steve) Beaird. His nieces and nephew are Taylor Overstreet, Mary Reading (Andy) Graydon, Natalie Beaird and Dawson (Alysia) Beaird. He is preceded in death by his wife, Shirley Dawson; his mother, Mary Emma Dawson; and his father, Robert Porter Dawson. Visitation will be Thursday, September 3rd from 5 to 8 at Scottsboro Funeral Home. The service will be Friday, September 4th at 12 noon in the Scottsboro Funeral Home Chapel with the Reverend Dex Bender and the Reverend Polly Robb officiating. Burial will follow at Cedar Hill Cemetery. Pallbearers will be firemen with Honorary pallbearers consisting of Brad Bradford, Danny Bridges, Clyde Butler, Dennis Dawson, Randy Giles, Monty Hill, Hoyt Harbin, Paul Holland, Larry McBride, Gene Necklaus, Jeff Stewart, Bill White, Chris White, and David Valentine. In Lieu of flowers donations may be made to Saint Jude's Research Hospital or to the local VFW Post 6073. Arrangements Entrusted to Scottsboro Funeral Home

The family of Robert Bishop Dawson Sr. created this Life Tributes page to make it easy to share your memories.

Send flowers to the Dawson family.