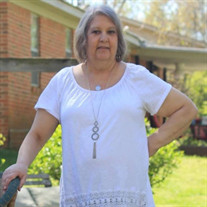 Susan Bean Milligan, age 70 passed away Thursday, September 9, 2021. Funeral services will be handled by Scottsboro Funeral Home. Visitation will be held Monday, September 13th from 5-8 p.m. at The Gathering Church of God. Funeral services will be Tuesday, September 14th at 2 p.m. in the sanctuary of The Gathering Church of God. Rev. Rick Vinson and Bishop Matt Beaty will officiate, followed by burial at Cedar Hill Cemetery. Mrs. Milligan is survived by her husband, Don Milligan; daughters, Donna (Scottie ) Reynolds, April (Bruce) Maples, and Leia Milligan; grandchildren, Kaitlyn (Corey) Griffin, Jared Reynolds, Bryce Milligan, Laura Beth Maples, Anthony Stansell, Amanda Stansell Sisk, Tavian Milligan, Micah Milligan, and Aviana Milligan; great grandchildren, Sophia and Cooper Reynolds, Raelynn Griffin, Soren Stansell, "Baby" Stansell; sisters, Mary “Becky” Putman and Amber Doebler; Sister in law, Joanne Bean; brother and sister in law, Gary and Sharon Milligam; a special family member, Tisha Gross. She was preceded in death by her parents, Jesse Bean, Jr. and Mary Lena Moorehead Bean; brothers, Jerry Bean, Terry Bean, and Michael Bean; sister, Emily Dietrich; son, Ronnie Milligan; and grandson, Hunter Atchley. Susan was born August 14, 1951 in Harvey, Illinois. She married her soulmate at age 19 on November 28, 1970, and together they built a beautiful love story. Susan and Don lived in Grant Park, Illinois where they began the journey of a lifetime. Susan was a retired CNP employee from the Jackson County Board of Education. She loved working with children. She spent many years teaching Sunday School, leading Missionettes, and serving alongside her husband, Don, in Children’s Ministry. She also raised money so all children would have a chance to go to church camp. Susan spent many years as a pastor’s wife in addition to teaching children God’s word. Susan’s favorite passage of scriptures was Proverbs 22:6-“Train up a child in the way he should go, and when he is old, he will not depart from it.” Susan was passionate about her family, and nothing was more important to her aside from her relationship with god. She loved her family endlessly and would do anything for them. Susan did not want to be recognized for anything, and always put others above herself. She had a selfless servant’s heart in the purest form.

The family of Mrs. Susan Bean Milligan created this Life Tributes page to make it easy to share your memories.

Send flowers to the Milligan family.